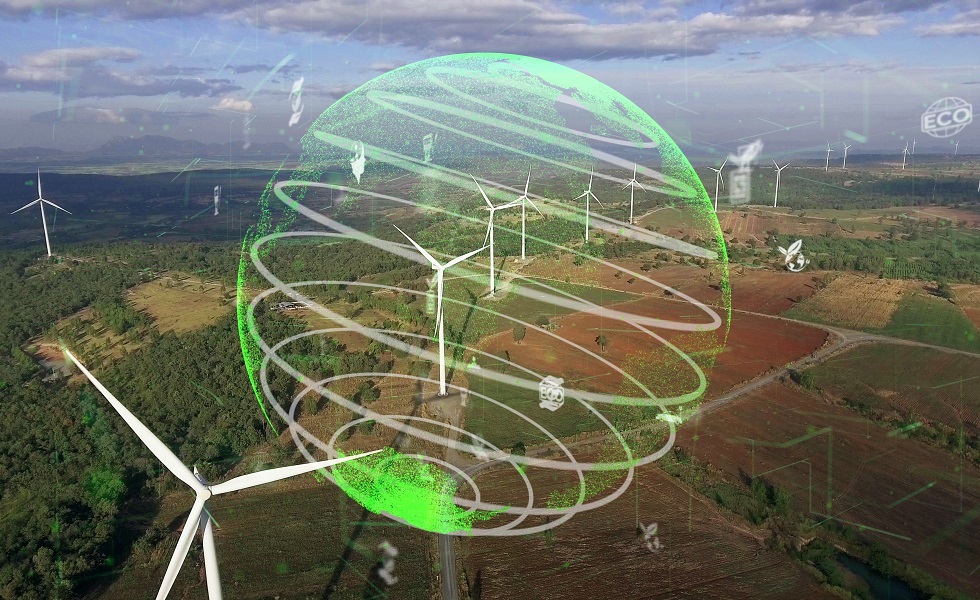 There are mixed signals about the immediate prospects for growth and inflation. For now, risky assets’ resilience seems to indicate that investors have not given up on the idea that inflation will moderate in the coming months and that the Fed may become less hawkish.

We believe that the main central banks’ focus will remain on inflation rather than growth, so in our view it is too early to anticipate a dovish pivot by the Fed or the ECB. Our multi-asset model portfolio remains positioned for weak global growth and more monetary policy tightening through moderate underweights in equities, credit and government bonds. We increased our underweight in Eurozone equities due to the risks to European growth and inflation from the energy crisis.

European gas prices have hit new record highs. At EUR 230 per megawatt hour, the Dutch one-month forward contract is now three times more expensive than it was just two months ago and about 10 times higher than the average level over the ten years before 2022. The market remains nervous about the potential for shortages in the winter.

Currently, Russian supply through Nord Stream 1, an offshore gas pipeline that runs from Russia to Germany, is only at 20% of capacity. Russia cutting off supplies completely or a cold winter would make the market even tighter than it already is. Ukraine’s direct attacks on military targets in Crimea could herald the beginning of another escalation of the conflict. And with the Ukrainian army deploying more Western arms and pushing back the Russian army in the area around Kherson, we might see more Russian retaliation against Europe.

EU gas inventories have risen to 73%, so the target of 80% by the end of October looks feasible. The rapid filling of inventories has probably put upwards pressure on prices, although agreements have been reached among EU member states to reduce gas use. So far these are still voluntary, but they might become binding if shortages worsen.

In recent weeks, demand for gas has increased due to the climate crisis in Europe. Drought has caused a sharp decline in French nuclear power production and is threatening Norwegian hydroelectric power generation. Meanwhile, low water levels in the Rhine are affecting the supply of coal to German power plants. All this is making the gas market in Europe even tighter.

Europe’s high dependence on Russian gas makes it more vulnerable to tight energy markets than other regions. This explains why European growth data has been weaker than in the US and why inflation momentum in the Eurozone is not showing any signs of moderating yet. There is also still considerable concern about the inflation outlook in the US, mainly because of the tight labour market, but headline inflation moderated in July on the back of lower energy prices.

In the Eurozone, July CPI was higher than in June. Inflation is having a big impact on European households’ purchasing power as wage growth remains insufficient to compensate for sharp price increases. This means that economic growth in the Eurozone is likely to remain under pressure and also that corporate earnings growth will probably be disappointing in the coming quarters. The negative growth outlook will only be worsened by the actions of the ECB, which, for now, remains firmly focused on fighting inflation.

For all these reasons, we moved from a moderate to a large underweight in Eurozone equities.

The Chinese economy continues to struggle

But Europe isn’t the only region where economic growth is under pressure. In China, July activity data again showed that it will take time for the negative impacts of the housing-market and Covid crises to ease. Most indicators were weaker than expected, apart from exports and industrial production.

Property investment continued to slump, down 13% relative to July last year and close to the -15% year-on-year fall recorded in February 2020 when most of China was in lockdown. Indicators such as new home sales and house prices continue to deteriorate, and weakness is also visible in areas such as furniture sales and cement production.

The housing market crisis and the ongoing struggle with Covid are continuing to hit confidence, which explains why credit demand in the private sector remains weak. The authorities cut reserve requirements for banks and reduced interest rates again last Monday, but so far such cuts have not led to higher private sector credit growth. Only credit to government entities has increased in the past year (see figure). 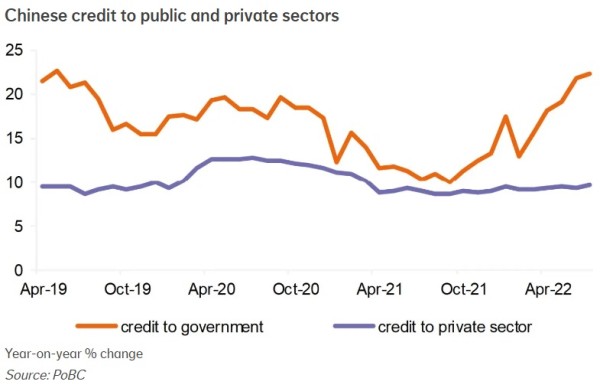 It will not be easy to solve the broad crisis of confidence in China. Putting aside more fundamental problems regarding state interventionism and private companies’ room to operate, it will be crucial for the authorities to stabilize the housing market and organise a swift exit from zero-Covid policies. In this context it is encouraging that recent government measures have reflected greater urgency to deal with the problems in the housing market.

Earlier this week, it was announced that the state will guarantee new bonds issued by troubled real estate developers. Monday’s interest rate cut should also be seen in this light: the main objective of the surprise rate cut of 10 bps was probably to bring mortgage rates down further. We expect that more meaningful government support for the housing market will bring a recovery closer, but it will still take a number of quarters before the sector contributes to economic growth again.

We do not think that inflation and the Fed’s hawkishness have peaked. Inflation could easily remain high for longer than market participants are currently discounting, so we question whether the Fed will be in a position to start cutting interest rates by the middle of next year. As we believe 10-year yields are more likely to rise than fall, we remain underweight in Treasuries.

Inflation is also still high in Europe, mainly due to rising energy prices, and despite a much weaker growth picture than in the US. The ECB will keep its focus on inflation and is therefore likely to remain hawkish. As such, we maintain our underweight in Bunds. Their current yield implies a deposit rate of 0% and the end of net asset purchases. We think there is a high probability that the ECB will hike rates further, which could result in Bund yields rising.

We remain bearish on credit and think that the narrowing in US and Eurozone credit spreads since July has been excessive. We still see upside risk for short-end interest rates, and the growth outlook in both the US and Europe continues to deteriorate. The market has used these macro developments to discount easier financial conditions down the line but seems to be ignoring the significant uncertainty about the inflation and monetary policy outlook. In our view, financial conditions have not tightened enough for central banks to pull back yet.