The new Regional Comprehensive Economic Partnership (RCEP) trade deal stands to strengthen the Asia-Pacific region’s already strong external surpluses, and represents a symbolic win for China, Asean and the rest of the signatories. 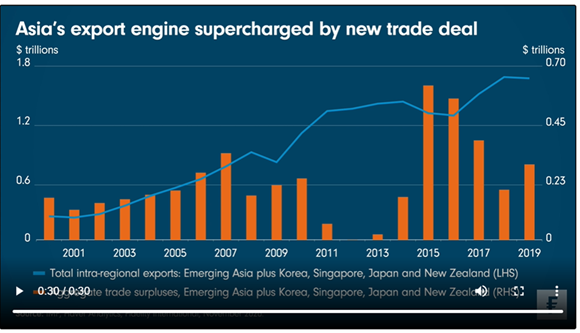 Asia is already the world’s trade powerhouse, but the Regional Comprehensive Economic Partnership (RCEP) turns things up a notch.

This week’s Chart Room look at the export dynamism that underpins the new trade deal, which was eight years in the making and brings together 15 Asia-Pacific countries accounting for 30 per cent of the world’s population and nearly as much of its economic output. RCEP represents incremental initial progress on tariff reductions but brings together China, Japan, Korea, Australia, New Zealand and Southeast Asia’s 10-member Asean group in a formidable trading block.

In geopolitical terms, ratification of the deal would be a symbolic win for China - one that shows that the region can cooperate multilaterally without the influence of the United States, which under Donald Trump has been pulling back, most notably by dropping out of the rival Trans-Pacific Partnership trade deal in 2017 and launching a trade war with China.

In economic terms, external surpluses have historically fuelled Asia’s growth and development, and this engine looks set to rev up yet again under RCEP. The region’s aggregate trade surplus had already been lifted this year by the combined effects of low oil prices and supply chain disruptions in the rest of the world caused by fallout from the Covid-19 pandemic.

As our chart shows, the 15 RCEP countries have continued to run annual aggregate trade surpluses of hundreds of billions of dollars despite the effects of trade wars and the looming prospect of broader de-globalisation. At the same time, inter-regional trade as measured by gross exports has continued to climb steadily. Even amid the Covid crisis, Asia’s has maintained a massive trade surplus, which is currently running at an annualised rate of $900 billion for 2020.

We think RCEP stands to further boost Asian export growth and productive capabilities. To the extent the region’s comparative advantages in externally focussed sectors lead to capital inflows and knowledge-building, this should in time result in domestic demand growth.

Amid Covid, we have seen that many Asian economies have suppressed the outbreak relatively efficiently, allowing manufacturing, transport and supply chains to remain intact, while Europe and the US have had to rely more on imports. In general, Asia’s strong industrial base has allowed it to better weather the specific nature of the Covid shock. As a result, we have seen Asian export prices rise sharply - up 4.8 per cent at an annualised rate in the third quarter. With oil - Asia’s key import - also seeing prices depressed by a build-up in global inventories in the wake of Covid, this implies a significant boon to Asia’s terms of trade. A Joe Biden presidency could present a further boost, especially if it brings a more predictable US trade policy and the optionality of reducing Trump’s tariffs.

Lastly, a widening trade surplus theoretically leads to currency appreciation. Given the US dollar’s outsized strength over the past decade, some mean reversion among Asian currencies can be expected - and is relatively painless. Indeed, forex appreciation could even help cap inflation in Asian countries where fiscal stimulus will be needed as the region rebounds from the economic drag of Covid.