As the effective October-end deadline draws near for defining the terms of a post-Brexit trade relationship between the United Kingdom and the European Union, one thing is already perfectly clear: The original vision of a comprehensive free-trade deal has given way to two potential limited outcomes that aren’t tremendously different from each other in their likely long-term economic effects.

We’ll learn soon whether the parties can strike a deal on a new bare-bones trade relationship to take effect January 1, 2021, or whether they’re resigned to a no-deal scenario of tariffs and quotas as defined by the World Trade Organization.

While important issues remain, some of the more pressing concerns—for example, allowing E.U. financial institutions to keep operating in the U.K. while they work to secure full U.K. authorization—have been allayed.

The implications for markets also hinge on deal versus no deal, with the U.K. currency and stock markets likely to come under pressure in the absence of some sort of deal. But the bulk of the markets’ response has been baked into prices since that early-summer day more than four years ago when U.K. voters chose their go-it-alone path, and investors would be wise to tune out the market noise that either scenario is likely to generate.

Downsides to lack of a trade deal
The economic downsides of no deal exceed those of a bare-bones deal. A no-deal scenario would create, to all intents and purposes, a customs border between Northern Ireland and the Republic of Ireland (an E.U. member) and would likely bring disruptions in the form of vigorous border checks, queues at ports, and a possible equity market sell-off.

Yet a bare-bones agreement also would bring change. Like no deal, it would restrict cross-border movement of people between the E.U. and the U.K. And it would create a customs border between Northern Ireland and the rest of the U.K. Neither is the case through year end, with the U.K. still operating under E.U. rules.

Vanguard estimates a bare-bones deal would result in just over a 6% decline in U.K. gross domestic product over the next 10 years, compared with our GDP expectations if the U.K. were able to maintain current E.U. trade rules. No deal would worsen that decline to nearly 8%. 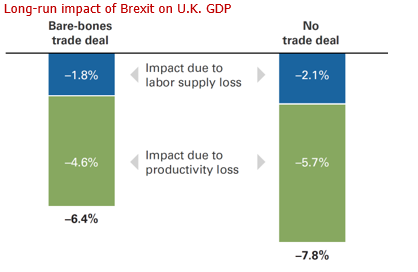 Notes: This figure shows the cumulative impact of Brexit on GDP by 2030. Productivity impact is estimated using a vector error correction model that incorporates a proxy for trade openness and foreign direct investment. Human capital growth is assumed to be unaffected by Brexit. Labor supply is assumed to grow at a similar rate to total population growth.
Sources: Vanguard calculations based on Macrobond and the U.K. Office of National Statistics.

To be sure, the effects on GDP of either a bare-bones deal or no deal at all will pale in comparison to the economic effects of the COVID-19 pandemic. But while the COVID shock may eventually unwind once the crisis abates, the effects of Brexit on U.K. GDP are likely to persist over the next decade and beyond.

Lack of a trade deal doesn’t have to be forever
Brexit was driven in part by the idea of the U.K. being able to strike out on its own and reach better trade deals with other countries. For the most part, this hasn’t happened. Yet.

The U.K. has negotiated new trade deals with about half of the non-E.U. countries with which it previously had trade relationships through the E.U. But those countries represent only 18% of the U.K.’s trade, and for the most part, these deals broadly replicate the terms of the deals previously in place through the E.U.

Expectations for a comprehensive U.K.-E.U. trade agreement similar to the E.U.’s agreement with Canada were shredded long before the final grind to “get Brexit done.” The Canada agreement, the Comprehensive Economic and Trade Agreement, took effect in 2017 after more than eight years of negotiation but still hasn’t been signed off on by all E.U. member states A U.K.-U.S. trade deal has no immediate prospect. An Australia-style deal, which has also been mentioned, is essentially a no-deal option under which Australia-E.U. trade is conducted mostly by World Trade Organization rules.

And then there’s the question about future trade with the E.U., which has less at stake proportionately than the U.K.

Even if no deal is reached with the E.U. in the short run, it doesn't mean no trade deal permanently. When trying to make trade easier, the one group you want to make sure you trade with as easily as possible is your giant next-door neighbor that accounts for about half of your trade. A bare-bones deal would be a far smoother starting point, however.

U.K.-E.U. trade implications for investors
As is often the case when a major market event occurs, investors should expect volatility over the coming months. The specifics of Brexit are difficult to predict, and risk perceptions can change quickly.

But we believe that expectations about Brexit’s effect over time on fundamentals such as future profits are largely priced in. So the bar for investors is not whether Brexit will further affect asset prices, but whether you think you have a better view than everyone else about what happens next. That's a very high bar, and it reinforces Vanguard’s belief that investors should maintain a balanced portfolio across asset classes and regions in keeping with their well-considered long-term investment plan.