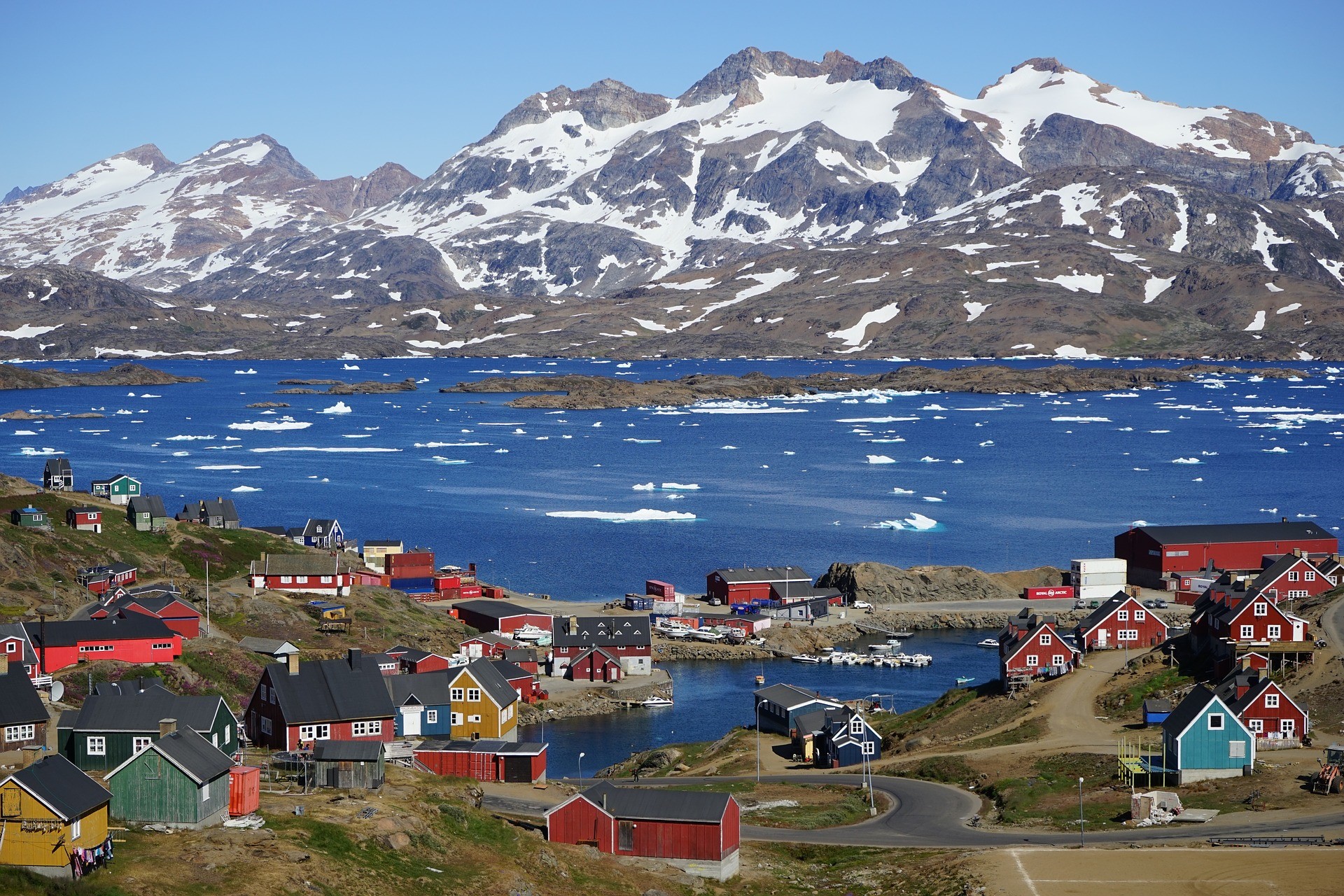 Danish Prime Minister Mette Frederiksen gives Trump a firm ‘no’ as he tries to buy Greenland, despite his lack of ‘green’ credentials.

Following the market turbulence in the first half of August, financial markets had a quieter week. Volatility indicators, such as the Vix Index, were back below their 12-month average in the absence of substantive ‘new news’ or tweets.

Predictably, Trump has been using Twitter to continue to bash the Federal Reserve, seeking to bully them into cutting interest rates more aggressively.

FOMC minutes described a decision to ease last month based on ‘global factors’ and ‘risk management’. It certainly seems odd to see the Fed operating with an easing bias when the domestic economy continues to move along just fine. In the past couple of months, there have been signs of slightly higher inflation, robust consumer behaviour, a solid labour market and a pick-up in housing market activity related to lower mortgage rates.

Ordinarily one would not be expecting the central bank to be cutting rates at such times as this, but it seems that Powell has been cowered into submission by the Commander in Chief and increasingly the Fed is looking like a flaccid follower of POTUS, without the political will or confidence in its own convictions.

Of course, with inflation low, the potential cost from a policy error in taking rates too low may be modest for now.

However, it seems increasingly dangerous that Trump has put himself in a position where he seeks to control trade policy, monetary policy, FX policy and fiscal policy based on his own analysis and desire to maximise the US economy into the 2020 Presidential election, in order to maximise his own election chances.

Global G3 government yields were little changed over the course of the week, though sentiment in risk assets was supported by a rebound in US equities from their early August lows.

In rates markets, a first 30-year German auction printed at a negative yield received some attention – though in honesty – we have got used to sub-zero issuance in the two, five and 10-year parts of the curve for some time.

There remains something strange in being asked to purchase an asset that guarantees to pay you back less than you paid for it. Indeed, there was a time in bond markets when you only received a write-down on your principal in the case of default.

Perhaps if yields go much lower, we will need to re-think our risk framework in order to deliver a more normalised expected loss on all securities rather than thinking about credit risk as distinct to rates risk in a negative yield environment, where safe securities no longer guarantee preservation of capital – but rather are imposing a cost on investors for the privilege of perceived ‘safety’.

In the eurozone, politics in Italy remained in focus. As widely expected, Prime Minister Conte stepped down after La Lega withdrew its support for the government coalition. However, President Mattarella has postponed any decision on new elections until next week, with Five Star now looking at forming a new government with the mainstream Democratic Party.

If such a compromise is achieved, we see this leading to a material rally in Italian assets on the perception of a reduced political risk premium. It seems most investors are keen to portray Salvini and La Lega as Eurosceptics who harbour a desire to confront Brussels and ultimately leave the EU. It is this fear that has seen a substantial widening in Italian spreads in the past year.

Ultimately, we tend to believe that most investors are very wrong on their understanding of La Lega. We don’t think this party has its roots (in the North of the country), or its identity, committed to leaving the EU.

Rather, we think that Salvini is keen for a reform within the EU and we may also be given to think that a right-wing government may be capable of making more of the market-based reforms, which are required to make the Italian economy competitive on a medium-term view. Yet we seem to be in a minority in this view for the time being.

Consequently, any move towards a new coalition without La Lega is seen as a potential blessing – and with the prospect of QE from the ECB just around the corner – it is possible to see how a constructive political outcome in Italy could be the basis for a further material narrowing in BTP spreads.

Bold Boris sets himself up for a fall?

Elsewhere, we have seen Boris Johnson on his tour as he seeks renegotiation of the Brexit deal and elimination of the Irish backstop. We believe that these efforts are destined to fail given the need for unanimity within the rest of the EU on any agreement or changes that would need to be made.

Moreover, there is a sense in Brussels that there are enough MPs in Westminster who will seek to avert a ‘No Deal’ in order to render some of Boris Johnson’s bluster as a bit empty for now.

The first week in September promises to be an interesting one, when the UK Parliament returns. Clearly a hard Brexit on 31 October cannot be ruled out – but it certainly isn’t our central view. We can’t overstate enough how unprepared the country is for ‘No Deal’.

If this ever were to be the Brexit strategy, it may be possible to deliver this with a greater notice period and longer to adjust (as was meant to be the case with the proposed Agreement on the Transition period).

However, the one thing we can say at this point is were such an event to occur, we widely expect Johnson to be back in Brussels with his begging bowl by the middle of November – ready to take the Theresa May deal – when the full reality of this hits the UK.

The Jackson Hole conference on monetary policy will be a focus this coming weekend, with investors looking for clues on monetary policy. As things stand, we see the Fed cutting by 25bp in September and then taking no further action in the context of their ‘mid-cycle correction’.

In the eurozone, we are sceptical of the merits of ECB rate cuts given how low rates currently are. Consequently, a 10bp rate cut (if delivered) should be the ECB’s last, with more focus on measures such as an extension of QE.

We believe that an open-ended commitment to QE may be given, linked to a policy target. In this way, the ECB may be as clear as it can be that it is creating the space for a more accommodative fiscal policy in the eurozone.

We see the ECB raising the 33% issue limit on government bonds up to 50% and also implementing deposit tiering. This should ultimately benefit spreads and flatten yield curves in the region. The move towards a more expansive fiscal policy is already underway – but likely at a rather glacial pace. Unless Trump decides to shock the eurozone with some auto tariffs, or there is another new down-side risk, it seems likely that progress to more fiscal easing will only be gradual.

It has been an eventful August and the month is not yet done.  In emerging markets, the fall-out from Argentina continues and it is interesting to see how this impacts investor risk sentiment more broadly.

For now though, our risk is focussed on the EU periphery, as this is where the value seems most obvious to us. In the weeks ahead, it is possible that we could reduce exposure should spreads rally further and we may be looking for value that may be starting to come about further afield – particularly with Trump’s tweets now a seemingly reliable source of periodic volatility.

Over the past couple of years, Trump has seemed to be deft at silencing his critics and undermining his detractors – and so perhaps it was encouraging to see Danish Prime Minister, Mette Frederiksen, finally deliver an unequivocal ‘No’ to the US President, rebuffing his seemingly left-field idea to purchase the country of Greenland. Sulking afterwards, Trump has cancelled a planned visit to Denmark. Given Trump’s lack of ‘green’ credentials, the whole episode seems pretty ironic – even more so to muse that the Prime Minister of Greenland is named Kim (has Donald got a major Kim fascination?).

More pertinently though, it has been interesting to see how it has taken a strong woman to put Trump in his place, on an issue which is really none of his business. Can you learn from this Jerome?  After all, at some point it is the right thing to stand up to a bully.