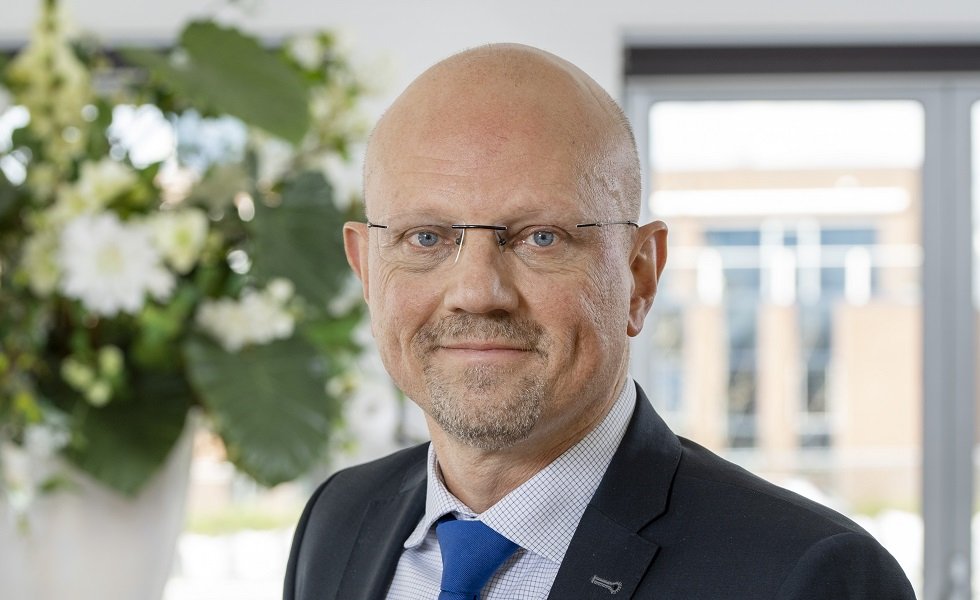 Capitalism gets a lot of criticism these days. It has been blamed, among other things, for growing inequality, for increasing climate pollution and for causing higher inflation. The remarkable thing, however, is that the largest highly developed countries have moved towards a completely different economic system, namely 'corporate socialism', a system in which, paradoxically, the top 1% has become ever richer.

The Netherlands was recently shaken by the news that in our country the pay gap between the CEOs of large companies and the workers has once again widened, from a factor of 35 to 40. Top incomes rose by no less than 32%.

The CIO of Triodos IM Hans Stegeman rightly added some nuances to these figures in a Linkedin-post. The figures mainly relate to listed companies and they reflect a one-off effect due to the sharp rise in share prices last year. Nevertheless, even when disregarding these factors, top incomes still rose 10%, which is significantly more than the average CLA increase of 2.2%.

In conclusion, Stegeman wondered whether the sharp rise in top incomes was the result of a form of (shareholder) capitalism or of nepotism. But actually there is a third and even better answer, namely ‘corporate socialism’. Certainly, the economic system that has emerged in the developed world in recent decades is no longer a true capitalist system. And it is therefore remarkable that for problems such as inequality and environmental pollution people gratuitously and almost thoughtlessly keep blaming capitalism. But it is much more nuanced than that.

The system of corporate socialism, which is currently a much more common economic system, has at least five dimensions:

Corporatocracy is best defined as an economic, legal and political system governed by large organisations. Over the years, weak antitrust rules have created excessively large companies that have gained political power through gifts and donations to politicians and political parties. In the US, this system has already gone so far that no politician can be elected without his own money or money from corporations.

It would be going too far to cover all these six symptoms in detail. One of the central points is that many industries are dominated by oligopolies, which are so powerful that they even contribute to inflation. Furthermore, the power of these large corporations is so great that they can enforce tax benefits. So there is no longer a ‘fiscal level playing field’ between the large and smaller companies. The bigger the company, the more opportunities the top has to arrange big rewards for themselves and shareholders. Especially since the Dot.com crisis, the amount of GDP paid out to employees has declined sharply (see Figure 1). 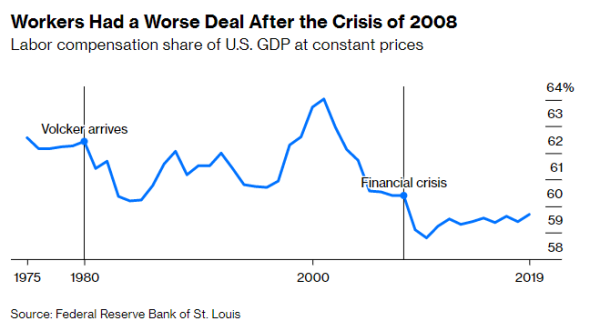 It is not only major corporations that set the agenda. Often, politicians in the lobbying bureaucracy get (side) jobs in business and can push through a political agenda there. The mixing of politics and banks is especially striking, not only in the US, but also in Europe. Large investment banks help to determine the approach to crises and may also carry out necessary financial operations. So large corporates and the government thus influence each other mutually.

2) Crony capitalism: the conflicts of interest of large corporations, governments and politics

There is a big job carousel between going on between large corporations, central banks, politics and semi-governmental and supranational organisations. The interconnections and related influence are often difficult to fathom. A salient example of this in the Netherlands is former prime minister Wim Kok. As a trade union leader and politician he spoke out against 'exhibitionist self-enrichment' by the top of big business, but as a commissioner at ING he approved of these exorbitant rewards for the bank’s top management. More generally, it is also referred to as ‘crony capitalism’.

The role of central banks has changed enormously in the last twenty years and especially since the 2008 Financial Crisis. It is no longer predominantly about the purchasing power of the currency. Political appointments of board members are taking place. Governments are being financed monetarily. Financial markets (and therefore the large listed companies) are being supported in every major crisis. And recently, policies have been introduced to facilitate the climate transition. In short, central banks have become political institutions, without democratic accountability, serving corporate socialism.

Society has become more and more complicated due to increasing juridification, financialisation and bureaucratisation. Small companies and citizens can barely cope with what is coming at them ( although the cloud may offer some relief). The result is increasing scale in business and people feeling displaced. Another consequence of increasing regulations for the banks is that smaller businesses have less and less access to financing from the banks. Because of all the regulations and capital requirements, it no longer pays off for the banks.

Smaller or start-up companies have to raise their money in other ways, via friends and family or via platforms for venture capital. The question is whether they receive the right support. In addition, they often have to pay more. Another dimension of the ongoing juridification is that people increasingly only want to do business with larger companies, because they are better able to comply with all the rules or will be saved if things go wrong. Big companies and governments only do business with big companies.

In other words, there is more and more risk mitigation in general and avoidance of career risk in particular, which suits large corporations.

5) The right of ownership is no longer sacred

A few examples will suffice here. During the 2008 Financial Crisis, Fortis, ABN Amro and SNS were nationalised. Recently, the same fate befell the French EDF. Since the war in Ukraine, Russians have been unable to access their bank accounts and their assets have been confiscated. In Canada bank accounts of protesting truckers were blocked. The salient point here is that the government decided so and banks, which are supposed to be independent, had to cooperate. Dutch farmers may have to close their farms to deal with the nitrogen crisis.

Corporate socialism is also called socialism for the rich and capitalism for the poor Large corporations (and governments) get tax breaks and are bailed out when things go wrong at the taxpayer’s expense. 'Privatise profits and socialise losses.' The ECB's bailout of Italy, actually primarily a bailout of the banks, is another example. Italian banks hold Italian government securities as assets on their balance sheets. Any downgrading of this policy would cause a European banking crisis. This bailout is paid for by European citizens in the form of even higher inflation.

Corporate socialism is a system that is created for and shaped by large corporations, governments and supranational organisations such as central banks and the IMF. It changes the political arena. There are political parties that either support this system or rail against it. Research by Pew Research in the US shows that Republicans are increasingly losing confidence in institutions such as the government, semi-government organisations et cetera, while Democrats broadly keep their faith in them.

The political terms left and right are changing along these lines. Most 'left-wing' parties nowadays support corporate socialism. It is striking that the average income of voters of some left-wing parties are among the highest in the Netherlands. On the other hand, the much less well-off usually vote for parties that the media like to portray as right-wing or extreme right-wing. The fact that Trump mainly got the less wealthy Americans behind him should also be understood in this context.

PS: Suggestion: let’s go back to the real capitalism, with a strong, independent government that counteracts the frayed edges of capitalism through strong rules regarding competition, environmental issues, rewarding and tax avoidance. And of course independent central banks that have only one clear mandate: guarding the strength of the currency (and no more politically coloured appointments).

This article reflects a personal opinion of Harry Geels