China’s currency has been going from strength to strength, appreciating by more than 10 per cent against the dollar over the past year. True, other currencies including the Australian dollar, British pound, Canadian dollar and New Zealand dollar have also gained more than 10 per cent against the greenback over the same period, but in China’s case this is more than just a ‘weak dollar’ story.

Part of the explanation lies in divergent monetary and fiscal policy between the world’s two biggest economies. In the US, the Federal Reserve continues to maintain historically low rates and expansive quantitative easing, while Congress has approved trillions in fiscal spending for COVID-19 relief. China, by contrast, aims this year to trim its fiscal deficit relative to GDP, and the People’s Bank of China has been gradually tightening as it moves towards policy normalisation.

Marching to its own beat

For China’s currency, what’s noteworthy is the rise in the official CFETS RMB Index, which tracks the renminbi’s strength vs. a basket of currencies of its major trading partners, as this week’s chart shows. The index usually closely tracks the RMB's moves against the USD, the biggest (although decreasing) component in the 24-currency CFETS basket. In practice, the RMB often strengthens vs. the broader CFETS basket, whilst weakening against USD during bouts of dollar strength. This middling path makes RMB inherently more stable than other DM currencies in general. 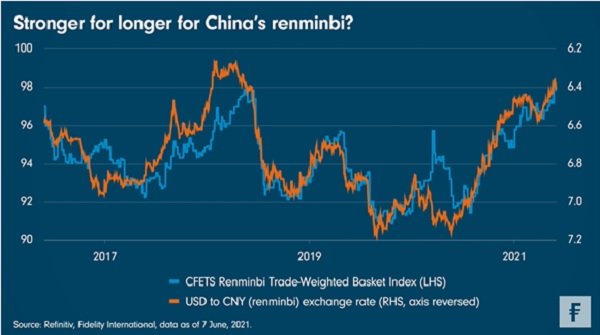 The question now for China’s currency is: stronger for how much longer? With the renminbi hitting a three-year high to the dollar, expectations had built in recent weeks of even more appreciation to come. But policymakers have acted to quell this and discourage one-way speculation. That includes the recent announcement that, effective June 15, the PBOC will hike the reserve requirement ratio for foreign exchange deposits, effectively curtailing renminbi strength by reducing the supply of dollars available for lending.

Keeping a lid on appreciation would be welcomed by exporters, whose business has supported China’s recovery from the economic slump of early 2020 brought on by the initial COVID-19 outbreak. Their profitability has been hit by a stronger renminbi as their products became more expensive for overseas buyers.

On the other hand, the currency’s recent strength has made imports comparatively cheaper, helping to temper the blow to China’s producers from the soaring price of commodity imports in recent months. This has been highlighted by factory gate inflation: data published June 9 showed China’s producer price index rose at a 9 per cent annual rate in May, a 13-year high.

In the near term, we think the scope for further appreciation is limited. Instead, we expect the renminbi will pursue a Goldilocks exchange rate corridor - not too hot, not too cold - and will balance both USD weakness and the broader CFETS basket as its bellwethers. In the mid-to-longer term, we see a number of structural supports for China’s currency. The goal for the PBOC is to internationalise the renminbi, promoting it as a reserve currency, in which case its relative stability will help attract corporates and institutional investors.

Our long-term constructive outlook is backed by solid fundamentals as China’s growth differential vs. most developed economies supports its more disciplined monetary policy and higher long-term yield. And China’s growing focus on domestic consumption as a growth driver also points toward a strong currency. Meanwhile, global investors increasing their strategic allocations to China’s onshore bond market could continue to bring strong foreign inflows over the next few years, providing an additional source of support.